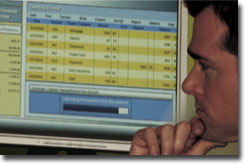 The 2006 edition of the FSA's Financial Risk Outlook reports that half of active Internet users say they are "extremely" or "very" concerned about becoming a victim of fraud when making an online transaction. Further, nearly all of the 1,508 participants in the FSA survey (95 percent) believe that at least some responsibility for online security should lie with the financial institutions, while 45 percent feel that banks should take sole responsibility. According to the study, 77 percent of users would abandon Internet banking completely were online fraud liability to fall on their shoulders.