50%
Tweet
As trading becomes more mathematical and model-driven, the role of the quant is becoming even more influential.

In a quiet loft building in Atlanta, a team of six mathematicians and computer scientists are applying predictive models to capture short-term inefficiencies in liquid stocks. "This is not an atmosphere that is full of adrenalin. It's the opposite of that," says Adam Afshar, president of Hyde Park Gobal Investments, an Atlanta-based hedge fund manager, who contrasts this environment with the typical trading room where traders monitor multiple screens with short attention spans. "It's a place like a library where people are doing complex calculations and they need quiet so they could keep attention on a problem for a long time." 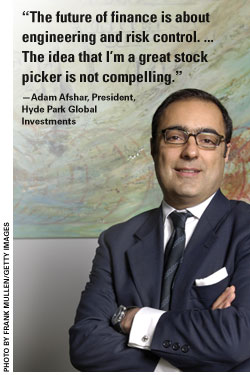 In addition to designing genetic algorithms, Hyde Park Global is developing predictive models -- models that learn from previous trades. "These are similar to models that are used to predict the movement of rockets or the movement of a cell in a laboratory," explains Afshar, who spent 12 years at Bear Stearns before starting the hedge fund company in 2003. "These problems take days, weeks and months to solve. It takes collaboration of different people and cross-fertilization of different minds to come up with these ideas."

The quant phenomenon -- and, with it, the demand for quantitative skills -- is growing on Wall Street, as the shift to program trading and algorithmic trading requires more math, technology and programming skills. "I see the role of quantitative analysis as only getting larger, and I think we're probably seeing a change in the demographic of Wall Street to reflect more technical trading," says Peter Fraenkel, director of quantitative services at Pragma Financial Systems, a developer of algorithmic trading systems in New York.

Even pure traders are more likely to be familiar with technology and know statistical techniques, adds Fraenkel, a former managing director at Morgan Stanley who sat atop an IT hierarchy that ran an analytics library for equity derivatives. "It's not that there's a new breed of quants, but that everyone is becoming more quantitative," he says.

Charles Reyl applies his quantitative skills to the energy brokerage market. Reyl, CEO of Parity Energy, was a VP in the global modeling and analytics group at Credit Suisse First Boston. While the typical quant jobs are on trading desks in banks, he says, the career potential of quants depends on their personality. "If they have a personality that is more business-oriented, then I think the world is [their] oyster," Reyl relates. "You can succeed in being very systematic and understanding certain problems that require quantitative understanding. ... These generalists would be successful any which way they want."