50%
Tweet
As Apple's valuation continues to slide, investors wonder if there is an upside for the technology pioneer's stock price.

Apple is scheduled to release its second-quarter earnings after the market close today, and regardless of their future growth forecasts or revenue, it is unlikely investor sentiment will change. Not only is Apple expected to post an earnings decline, but some analysts believe the company will lower its outlook for the current quarter as growth in sales of iPhones and iPads slows. The stock price has been hammered since hitting its recent highs in September of 2012, dropping nearly 43% in the past seven months.

When APPL was flying high there were analysts who were estimating that the stock would hit the $1,000 or $1,500. Now the rosiest estimates for the large cap consumer product and technology maker are $700 with average price targets near $500 per share.

Apple’s stock price dipped below $400 during this week for the first time in more than 15 months. Sentiment has turned negative and many are calling for a change at the helm, requesting that the board of directors consider replacing CEO Tim Cook.

Despite all the negative sentiment, the stock is trading at relatively inexpensive levels. The current price to earnings ratio of on Apple, Inc. is 9, which puts it below both Microsoft and Google. The 3-year EPS growth rate on the stock is 72%, while the 3-year sales growth rate is 57%. At the last earnings announcement, profits margins were 35.6%, and the dividend yield is 2.7%. 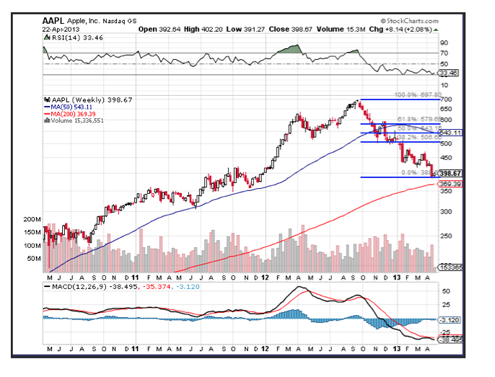 The stock price is trading at nearly a 52-week low and is closing in on long-term support levels generated by the 200-week moving average at 370 (chart courtesy of Banc de Binary). A break of this support level would likely lead to a test of the lows made in November 2011 at 350. Fibonacci levels can give investors a guide to potential retracement levels. Mathematician Fibonacci discovered a number sequence that reflects natural order and is used frequently within technical analysis to determine target levels along with retracement levels.

Weekly momentum on the stock prices has consolidated as reflected by the MACD (moving average convergence divergence) index. The MACD index is hovering near the zero index level while the spread is trading on top of the 9-day moving average of the spread. The RSI (relative strength index), which is an oscillator that measures overbought and oversold levels, is bumping around the oversold 30 level.

The risk for the stock could be to the upside given that there is so much negative sentiment built into the price of the stock. Numerous pundits are talking about Apple like it was Microsoft, a large cap company that is now a value play instead of a high-powered growth stock that is innovative and can produce life changing consumer products. Intertrader, a CFD trading broker, has a strong buy recommendation on the stock.

About the Author: Marcus Holland is Editor of FinancialTrading.com, an educational resource on derivative instruments. Marcus graduated from the University of Plymouth in 2005 with an Honors degree in Business and Finance and has since been trading the financial markets, with a particular focus on forex.