There has always been a war for talent on Wall Street. But as technology becomes ever-more deeply entrenched in trading, many firms are looking less and less for people with experience on The Street and more and more toward a new and younger talent pool. Firms are stepping up their recruiting efforts aimed at rising juniors from high-caliber universities and colleges around the country to fill trading and technology positions, as well as efforts targeted at graduate students in Masters of Financial Engineering and Ph.D. programs to fill quantitative positions.

And no firm is doing this more passionately and systematically -- or with more top-level executive support -- than ITG. 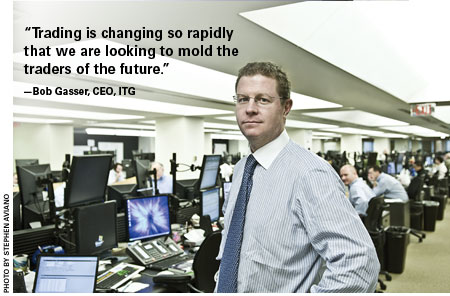 ITG, a global agency broker that prides itself on also being a technology firm, has grown rapidly over the last 20 years, according to CEO Bob Gasser. The firm currently has 1,300 employees and 18 offices globally. Finding talent over the past several years to keep pace with growth, however, has not been easy, Gasser notes, nor had there been a process in place at ITG to attract talent -- until now.

Gasser, who joined ITG 18 months ago, has made the recruitment process one of the firm's top strategic priorities. Rather than recruit mid-career-level candidates as the firm had done in the past, Gasser says, he decided to turn to tech-savvy students at top universities and in graduate and Ph.D. programs for disciplines such as financial engineering. The goal, he explains, is to mold the traders, quants and technology executives of the future.

And Gasser is not leaving the task up to his human resources department, as most firms do. Instead, he's spearheading the project himself and getting his six-person management team intimately involved.

"We are taking on a much different approach on the war of talent than we had in the past," Gasser relates. "What I mean by the war for talent is attraction, retention and development of our firm's intellectual capital." Gasser adds that he believes recruitment efforts are critical to the firm's growth and development, which is why ITG's top executives have been charged with the task.

Check out the short list of programs targeted by ITG for recruitment.