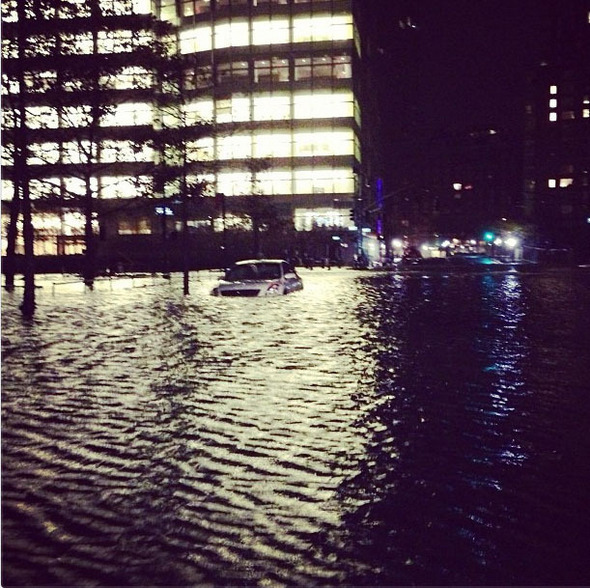 Goldman Sachs has two buildings that were directly in Hurricane Sandy’s path.

As the storm made landfall, the investment bank used a generator and sandbags protected the entrance of its headquarters. But damage to the vicinity, which completely lost power, was significant.

A photograph of Goldman Sachs’s illuminated headquarters while a car stood submerged in seawater directly in front of it, went viral.

Goldman COO Gary Cohn told Bloomberg TV the buildings suffered a little bit of “flooding here and there but outside of that, our buildings are in very good shape and are ready to go.” Still, he noted that the big issue was how to get people back into 200 West St. to work. The MTA suspended all subway service on Sunday October 28, and it had still not been restored below 34th Street in Manhattan by Friday November 2.

Asked by a reporter whether Goldman’s back up office in Jersey City was too close to its offices in Manhattan given the similar weather conditions in both areas, Cohn noted that Goldman is currently re-evaluating its contingency plans.

“It’s obviously one of the things we’ll talk about. We like our location right now as we like the ability to move people seamlessly between the New York and New Jersey location.”

He asserted the two offices do stand fairly independently from each other and are isolated in terms of their power grids.

He also pointed out that Goldman’s 1600 employees in Salt Lake City were able to carry out all of the investment bank’s operations if other facilities were compromised.