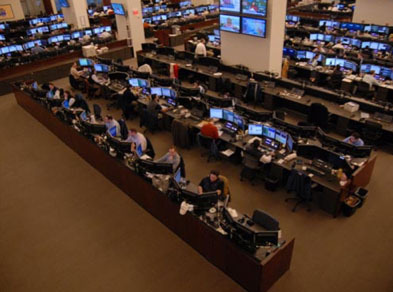 Talk about a bad stretch. On Wednesday, the trading firm that suffered a $400 million software glitch just three months ago told its customers to route away orders, after its Jersey City office had a "generator issue." The problem affected Knight's sales and trading businesses as well as its market-making operations, a spokeswoman said.

The firm alerted clients that "all computer interfaces with Knight will be shut down" and "no new orders" will be accepted, the Wall Street Journal reported .

Before Sandy hit, the company's generator fuel tanks were about 90% full and Knight received a 1,500-gallon delivery Monday afternoon, the WSJ reports.

As Sandy hurtled towards the North East, Knight chose not to switch trading systems to the trading firm’s backup data center in Purchase, NY. This could have eliminated the risks of relying on emergency generators in Jersey City, the WSJ reports. However in a memo, Knight CEO Tom Joyce said, “most businesses would be somewhat impaired” using the Purchase data center.

When U.S. stock markets reopened Wednesday October 31 after a historic two-day shutdown, Knight didn't have enough fuel to power its generators all day long. The company expected a midmorning fuel delivery from Hess Corp, but "the truck never showed up," Joyce said in the memo. Hess disputes this.

Still, Knight arranged a different fuel delivery, and the company calculated that its three fuel tanks held a total of 1,200 gallons, or enough to power the generators "past 2 p.m." Joyce wrote.

Knight received an additional 4,500 gallons Wednesday afternoon and night. "The team performed incredibly well given the stress of the situation," he concluded in the memo. It was back to business as usual at Knight's headquarters on Thursday morning, and generator tanks were "full."

Still, some Knight directors reportedly suggested that Knight look into upgrading its generators and fuel tanks, and review its fuel-supply arrangements.