Regulators are cracking down on errors and poor match rates, said UnaVista's executives.

On July 9, LSEG entered a strategic partnership with Wipro Ltd., to provide an "end-to-end" reconciliation solution for the financial services industry, stated the release. The utility solution -- based on a pay-as-you-go model -- will be hosted in London Stock Exchange's secure and regulated data centers and delivered to customers with reliance on Wipro's global service delivery capabilities. While LSEG already had a web-based, low-cost reconciliation system -- ensuring that banks have their cash and stock reconciled on a daily basis, said Husler, it was looking to further lower the total cost of ownership.

"We're not in the business of providing operational support. A lot of the total cost of managing reconciliations is the cost of people, not the technology," he explained. Many firms have lowered costs by adopting offshore outsourcing, but each firm built the same thing. Hence, UnaVista has teamed with Wipro to create a reconciliations utility. "The thought of the industry was we can pull together our resources to get the cost of trade lower," said Husler, who adds there is some growing interest from North America and Europe in the model.

On the trade matching side, UnaVista teamed with Omgeo to boost matching of synethetic equity swaps -- also known as contracts for difference in Europe, according to a July 23 release. "We have a lot of prime brokers on our system," said Husler, noting that Omgeo has a lot of investment managers using its Central Trade Manager product. "By allowing the two communities to connect, we're opening the gatway to allow equity swaps to be confirmed between the buy and sell side." 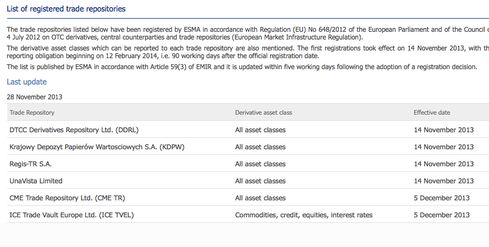 UnaVista is one of six trade repositories operating in Europe, but this adds to complexity in matching trades.

As the repository of that data, UnaVista makes that data available to regulators. Up to 60 regulators can access that data, explained Nowell.

"If one [counterparty] comes to us and another side goes to Regis or KDB or CME, we have to go through inter-trader repository reconciliation," said Nowell.

"Where clients value the UnaVista technology but want to use our system and control technology but route to DTCC as a TR, we allow that, said Husler. "Whether it's MiFID, DTCC in the states or in Asia, we'll help the client with the connectivity and the upstream transformation," said Husler.

Regulatory overlaps
Grappling with multiple regulations and regulators is a huge challenge for firms. "The subject instruments are going to increasingly overlap," said Nowell. A case in point is MiFID, which is looking for market abuse in equities and security-based debt derivatives, but MiFID doesn't cover exchange-traded derivatives.

Two pieces of legislation in Europe have been introduced, MiFID II nd MIFIR to bring more transparency to sectors that have been opaque and less liquid such as OTC derivatives. MIFIR is a regulation -- whose timetable is only two years away -- that will cover commodities, interest rate and forex derivatives. But EMIR also covers exchange-traded and OTC derivatives. "The key with MFIR is the number of asset classes increase exponentially," said Husler. "The buy side that doesn't report a great amount of volume under MIFID, will have to report," he said.

Rules engine
To help firms cope with compliance, UnaVista developed a regulatory rules engine to source data, reformat it, and send data to regulators. UnaVista's Rules Engine acts as a central hub for the production of data to meet global regulatory reporting requirements. "We have come up with a strategic technology that allows clients to send all the data from their own proprietary systems -- front, middle and back office systems. We'll consume it, normalize it and transform it whether that's to MIFID, DTCC in the states or to Asia. We help the client with the connectivity and with that upstream transformation," said Husler.

Noting that UnaVista has some large asset managers as clients, Husler said, "The idea is to find harmonization to regulation to what we developed," such as between Form PF and AIMD, said Husler.

Clearly with the pace of regulation, compliance demands are increasing and showing no signs of letting up. "With OTC derivatives on the back of Dodd Frank and EMIR, we're looking across Asia Pacific, Australia and Canada that have got similar regulations," said Husler.

"All these regulations are coming at them and fast, they've got all of the data and they need something to stitch it together," he said.