50%
Tweet
Al Gore's Oscar winner "An Inconvenient Truth" on alarming levels of global warming would be rebuked by cynics as a convenient means of reviving his ailing political career.

Al Gore's Oscar winner "An Inconvenient Truth" on alarming levels of global warming would be rebuked by cynics as a convenient means of reviving his ailing political career. Should the big businesses and banking community echo their concerns on rising levels of greenhouse gases by tying it to socially responsible investment, cynics will be quick to point out the gold mine beneath the business of apprehending the menace of global warming. Whether its inherent goldmine in the offing or political comeback of sorts, the business of pollution busting "carbon trading" designed to cleanse greenhouse gases from the atmosphere is here to stay.

Carbon Credit " A New Commodity On The Anvil

Environment related financial products are the new generation commodities in globally referenced commodity markets. Globally major companies and banking community together are vying for eco friendly "green spot" investment avenues by shelling in resources and devise products that are futuristic in generating revenues. Such a move from global banks and corporate tends to be more effective as compared to the conventional tree-huggers and philanthropists essentially because such innovations not only appear as socially responsible investments but also help cash in on multi-million dollar future demands.

The business of trading green house gases [GHG]; carbon-di-oxide [CO2] in particular can be traced back to the signing of Kyoto Protocol - a voluntary treaty signed by 141 countries, including the European Union, Japan and Canada to reduce GHG emission by 5.2 per cent below 1990 levels by 2012. However, the US, which accounts for one-third of the total GHG emission, is yet to sign this treaty. The preliminary phase of the Kyoto Protocol is to start in 2007 while the second phase starts from 2008. The essence of trading greenhouse gases such as CO2 is characterized by the system of "cap" and "trade". Member countries agree to reduce the amount of greenhouse gases they release into the atmosphere by a percentage referred as "cap". Trading takes place when members release less than their limit and hence left with surplus of emission credits. A carbon credit equivalent to reducing one tonne of CO2 emission is called Carbon Financial Instruments. These credits can then be sold to members that have exceeded their allowable limits. Carbon credits basically seek to encourage countries to reduce their greenhouse gas emissions, as it rewards those countries that meet their targets and provides financial incentives to others to do so as quickly as possible. The European countries and Japan are the major buyers of carbon credits. This is what makes trading in carbon credits such a great business opportunity.

The new generation of commodities would have a pivotal role exchanges have an important role to play in price discovery of all renewable and non-renewable natural resources for most optimal resource allocation. At present, the trading in carbon takes place on two stock exchanges, the Chicago Climate Exchange [CCX] (since 2003) and the European Climate Exchange [ECX] (since 2005).

A recent study by World Bank Study clearly outlines the market potential in new age commodities - Carbon-trading volumes have exploded from just 10 million tons in 2004 to more than 600 million tons so far this year. The total market size for carbon trading worldwide is about $10 billion currently and is expected to be worth some $45 billion annually between 2008 to 2012. 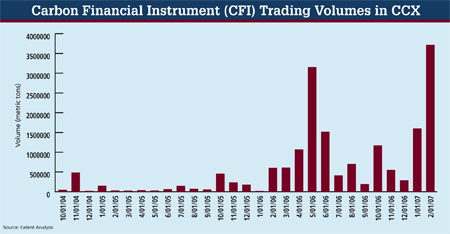 Such a demand clearly etches out the trade potential for this new found eco friendly commodity. In addition to the supply-demand dynamics, pricing of carbon credits are also influenced by penalties imposed on exceeding the emission limits, amount of tax levied on greenhouse gas emissions and the cost to realize the carbon reduction.

With regards to levying taxes on overshooting the allowable carbon emission limits, some countries already have a carbon dioxide tax ranging between $10 to $100 a ton; Denmark's carbon tax is $25 per ton, the UK introduced one in 2001.

Such regulatory requirements coupled with tax implications and supply-demand functions, the need for introducing trading of carbon credits in the Asian commodity exchanges appear to be promising. Also, on a comparative price advantage note, developed countries have to spend nearly $300 to $500 for every tonne reduction in CO2, against $10 to $25 to be spent by developing countries. Until recently credit purchases were not witnessed from developing countries and more often than not they were being funded by public institutions rather than private companies. The first signs of carbon trading from developing countries are now being seen. For example, several European governments have pledged to buy up to $1.1 billion worth of credits through the World Bank, which is acting as matchmaker for companies in the developing world that want help funding cleanup efforts.

There's little doubt that Asian giants India and China in particular will be big sources of credits. In developing countries like India, since the emission levels are much below the target fixed by the Kyoto Protocol they are excluded from reduction of GHG emission. Albeit India and China has no binding emission reduction targets under Kyoto but, needs to march ahead to the next level of addressing the volatile climatic changes by playing a more proactive part. On the contrary, these countries are entitled to sell surplus credits to developed countries. This leads to a flourishing trade in Credit Emission Reduction and the organization at the helm of carbon credit trading between the developing and developed nations is United Nations' Clean Development Mechanism (CDM). CDM gives carbon credits or certified emission reduction (CER) units to clean energy projects in a developing country. These credits can be sold to companies in industrialized countries. In fact, India is considered as the largest beneficiary, claiming about 31 per cent of the total world carbon trade through the Clean Development Mechanism (CDM). It is expected to rake in at least $5 billion to $10 billion (Rs 22,500 crore to Rs 45,000 crore) over a period of time.

Indian businesses are on an investment spree of greenhouse-gas reduction projects. The Government of India has already approved 227 projects, which could translate into approximately 250 million certified carbon emission reduction (CER) units with potential revenue generating capacity of around USD 1.25 billion, assuming an average selling price of USD $ 5 per CER.

In fact, recently with the aid of new technologies that Tata Steel introduced in its coke-quenching plant in Jamshedpur, it could pave way to produce more than 1.7m carbon credits over the next decade. The Japanese government has already bought up Tata's entire reduction. Gujarat Flurochemicals has struck a carbon credit transaction deal with Noble Carbon Credits of Singapore, which could be worth over Rs 1,000 crore.

Such deals could just be tip of the ice-berg signaling the long sustained innings that could be staged with the help of commodity exchanges by embracing such novel innovations. India's vast natural resources and new generation organized sector could well provide an important reason for the Indian industry to benefit from these products. Additionally, agricultural businesses in this part of the world can earn credits because plants remove carbon dioxide from the air " a process known as "carbon sequestration". The money that purchases carbon credits will ultimately be used to give grants to further carbon saving schemes.

However, to sustain growth in the nascent but promising new found carbon credit commodity a timely and right investment is essential to evade the lack of knowledge in this space.

The Author would like to acknowledge the review comments provided by Shriram Subramanian - Principal Consultant - Capital Markets Group - Infosys Technologies. Shriram can be reached at [email protected].