50%
Tweet
The popularity of smartphones and tablets has many financial services firms building apps specifically for mobile devices, while desktop apps are becoming an afterthought.

Now that financial professionals have reserved a spot for the iPad in their briefcases, banks that are forging ahead in the mobile space have started developing applications for tablets and smartphones first rather than simply optimizing their desktop applications for a mobile device. In other words, the traditional model of taking functionality developed for a desktop computer's browser and fitting it into a mobile app has been reversed. 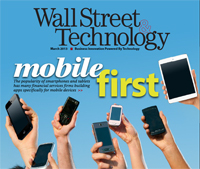 "By 2015, development for mobile applications will be more than twice what you see for desktops. So developing for mobile first is a trend," says Lucille Mayer, co-CIO of Pershing, a provider of financial and technology services for global financial institutions. In the future, all applications and platforms will be designed with mobile elements as the priority from the outset, she adds.

While the iPad added mobile users in the financial industry at break-neck speed, banks started carving a place at the forefront of the mobile space by capitalizing on the tablet's larger screen size and improving, rather than simply replicating, apps that they already had available for a smartphone. As such, a number of firms have been focusing on a modular design, combining what would be several screens on a smartphone into one tablet display.

Firms with a solid mobile strategy include E-Trade and Merrill Lynch, which were singled out in a recent report by market research firm Corporate Insight for providing related account information and research data on a single screen.

"When designing apps for the iPad and other tablets, firms should not crowd every inch of screen space as if it were a smartphone. Strike a balance between providing more content than on a small screen and keeping a clear, spacious, readable design," Corporate Insight noted.

Other firms that have been cleverly leveraging the iPad's large screen size include Chaikin Analytics, a provider of institutional-grade stock analytics to asset managers and self-directed investors, which earlier this year launched a research and analytics workstation for the iPad and iPad Mini.

The app, which offers proprietary analytics, lets users take full advantage of the iPad's swiping and pinching features to dig deeper into the analysis of a specific stock. The centerpiece of the app, which also offers ratings, models and actionable trading signals, as well as customized watch lists and flip charts, is the Chaikin Power Gauge Rating, a 20-factor rating that aims to identify a stock's potential three to six months out.

To date, firms looking to get into the mobile space have chosen several routes: Developers can either build a native app for Android, iOS and Windows devices, or they can attempt to avoid developing a native app for each platform by choosing HTML5. Others have selected a more hybrid approach.

Among the firms that have taken a hybrid approach is U.S. online brokerage TradeMonster, which chose to convert its highly rated Web-based platform for the mobile space with a core functionality based on HTML5 and a device-specific wrapper like iOS and Android, a patent-pending technique that lets users download the app from stores such as iTunes, Google Play and Amazon, TradeMonster CTO Sanjib Sahoo says.

"The idea was to reduce the time and cost of development to build native apps and ultimately provide the same user experience and number of features that its Web-based platform offered," explains Sahoo. The hybrid approach offers the flexibility to use on-demand native capabilities like resource utilization, statistics and messaging. Meanwhile, "updates to the application can be managed in a much smoother way as the core code is still Web-based HTML5 and helps TradeMonster constantly update the application without users having to download new versions of the app," he adds. The mobile app is synchronized with the desktop apps, and multiple devices are automatically and simultaneously updated with account- and trade-specific information.

Functionalities include streaming watch lists, advanced charts that stream tick for tick directly on a user's device, and the ability to create complex option strategies on the go and manage orders as well as bulk cancels. In addition, the tool can stream account balances on the go with asset and symbol visualizations.

Given the challenge of streaming huge amounts of data on a mobile device, Sahoo says the brokerage uses intelligent caching and streaming controls through its patent-pending architecture to optimize the lists of what the customer is viewing at that time. "That way your streaming experience is optimized," Sahoo explains. "You can switch between modes depending on what bandwidth you're on."

TradeMonster plans to release iPad and Android versions of its app that will let users manage multiple windows and layouts at the same time as well as customize the view on a specific device through drag-and-drop functionality. "The goal is the have one account synced simultaneously to all different devices in views that the user wants," Sahoo says.

In the meantime, in a bid to track the efficiency of its app, TradeMonster has been using Google Analytics and has also written its own analytics module to gain insight into how users are moving from page to page on the app, and which pages are gaining the most attention from users. "It's not only to track the customer, but we can also see how [the app] made an impact on our revenue stream. So everything is tracked," Sahoo explains. TradeMonster now plans to launch a tablet-specific app later in the first quarter of 2013.