If a new technology cost benchmarking model is right, many capital markets organizations in developed nations are spending, on average, a whopping $461,222 per front office employee, per year, for technology. What’s more, no matter what the dollar cost, nearly half of total technology spending in a financial services organization is allocated to the front office.

Presented in a TABB Group report, “Benchmarking TCO: Fueling the Debate,” author Paul Rowady seeks to more accurately redefine total cost of ownership by including IT human capital (HC) expenses -- and, in so doing, provide the entire industry with a useful new quantitative tool.

“While I’m sure there are leading firms that have developed their own TCO model to include the cost of human capital, I haven’t seen an industry-wide model as clean and clear as the one we’ve presented,” says Rowady, principal and director of data research and analytics at TABB and 25-year capital markets veteran. 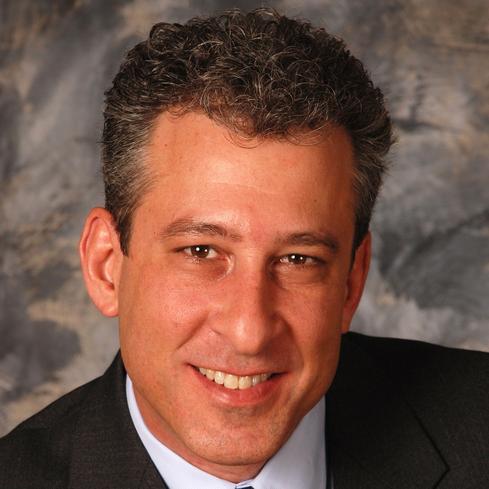 In a companion report, “FSI Tech Spend 2014: Introducing T-Alpha,” Rowady uses his findings to discuss what firms are getting for their technology investments. That report will be covered in the second of this two-part series.

Human capital ratio looks like pi
For the Benchmarking model, Rowady drew on five years of SEC filings of 10 Tier-1 US and European-headquartered banks and asset managers. He discovered firms spend about $3.14 on HC for every $1.00 of non-human capital (NHC), with NHC defined as the aggregate of hardware, software, and data.

So, for example, a firm with a $1 billion technology budget spends about $3.14 billion on human capital, for a total aggregate TCO of $4.14 billion. Further, 79 percent of the total cost is allocated to production uses, with the front office requiring the largest share at 49 percent. Middle office uses come in at 24 percent, with 6 percent for back office. By comparison, IT uses are 20 percent and management 1 percent.

“It’s important for firms to detach themselves from $461,222 per front office seat per year,” Rowady stresses. “Although every firm will arrive at a different dollar figure, the narrative is about determining where most spending is allocated and then making improvements, such as moving some commoditized functionality from proprietary to external.”

A few caveats
Due to his data sources, Rowady is quick to point out his model requires refinement. “For example, the large global banks included retail ATM machines in their technology spending,” he notes. “Obviously, capital markets firms don’t incur this expense.” 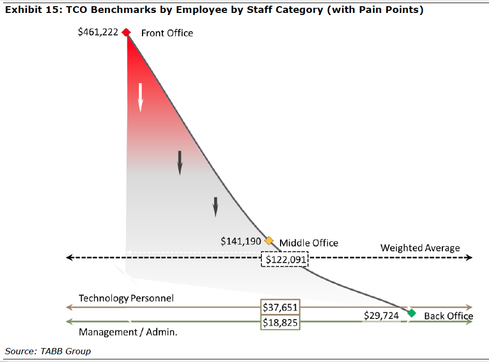 To improve the model’s accuracy, Rowady plans to do additional outreach. “I look forward to engaging with people on these estimates. Such discussions will help with improving and formalizing the model.”

Consistency breeds confidence
Still, Rowady’s research uncovered such consistency in the NHC component of the model that he’s confident in his analysis. “Although the smallest firm in the sample has about 8,000 employees and the largest about 270,000, their average NHC technology spend per employee is amazingly similar,” Rowady says.

Given this consistency, Rowady expects the fundamental tenets of the model will apply to smaller, non-public firms as well. “I would expect the model to hold up. We just won’t have the same level of transparency for non-public firms.”

Most importantly, the purpose of the benchmarking model -- and the subsequent T-Alpha analysis -- is providing firms with a starting point for determining how to re-align technology spending, not shed staff. “The exercise isn’t about minimizing your headcount,” says Rowady. “It’s about what you’re getting for your spend and how your firm can reconfigure its technical footprint to stay in the game.”