50%
Tweet
Citi has completed three LEED-certified energy-efficient data centers and is sticking to its $50 billion commitment to environmental efforts, which it says make good business sense.

Citi has quietly stepped into a leadership role in the "green" data center movement on Wall Street over the past two years. The financial services conglomerate has built three LEED-certified data centers -- LEED, which stands for Leadership in Energy and Environmental Design, is the U.S. Green Building Council's rating system for designing and constructing energy-efficient buildings -- in Frankfurt; Georgetown, Texas; and Singapore. In April, the Department of Energy and the Uptime Institute recognized Citi -- the only Wall Street firm in the running -- as a finalist for a Green Enterprise IT Award for data center facility design; Uptime also named Citigroup in its 2009 Global Green 100 list this year (along with nine other Wall Street firms).

Citi announced in April the completion of the Frankfurt facility, which is the first-ever LEED platinum-certified data center. [Ed. note: Last year we wrote about Advanced Data Centers, which is building the first LEED pre-certified platinum data center, but that project has not yet been completed.] The 232,000-square-foot data center is said to consume just 30 percent of the power required for a conventional data center.

The most striking aspect of the Frankfurt facility is its green wall (see photo, below) and roof, which are alive with what appears to be lush, weed-free lawn that puts most suburban yards to shame. But, "It's not grass; it's a succulent called sedum," notes John Killey, head of Citi Realty Services for Europe, the Middle East and Africa. "It's very drought-resistant; it stays green and doesn't grow particularly fast, so we don't have to keep sheep on the roof," he jokes. (Given that Google recently hired a herd of goats to trim its grounds, however, the notion of roof-vegetation-chomping sheep is not that far-fetched.)

"When I tell people we decided to put a grass roof on this data center, they shudder in horror," adds Jim Carney, senior executive in Citi's technology infrastructure group, who says they tend to fear leaks. 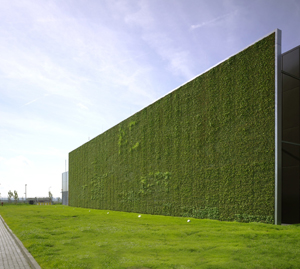 A Solid Roof Over Citi's Head

On the contrary, Killey asserts, the green roof actually prevents structural problems. "Often the failure of a roof system is caused by mechanical damage or ultraviolet rays," he explains. "Here, there's an actual physical barrier of earth and sedum, which protects from mechanical damage. It's a cost-justifiable solution over the full length of life." Killey notes that the green roof also keeps the data center cooler during the heat of summer.

The benefits of the living roof don't stop there. According to Killey, Citi harvests water from the roof, stores it and then uses it for site irrigation and as gray water for non-potable applications, such as for flushing toilets.

The Frankfurt facility also relies on a filtration process known as reverse osmosis to soften water without the use of chemicals; Citi says this saves 13,208,602 gallons of water per year. And water-efficient fixtures reduce potable water use by 41 percent.

While the green roof was planned as an environmentally friendly feature, the green wall was a requirement of local planning authorities rather than Citi's choice. The site, Killey explains, had been farmland (in fact, Citi's builders had to wait for the farmer to take out his crops before they could break ground) and the green wall reduces the visual impact of the data center and helps to replace the disturbed ecosystem.

For cooling, the Frankfurt data center relies on outside air rather than chillers, using water-side economizers 83 percent of the time (waterside economizers rely on cold outside air to cool an exterior water tower). While the facility is kept a bit warmer than traditional data centers, the internal environment is monitored closely and kept at a constant temperature. "It's OK for the technology equipment to be kept warm, but the machines don't like changes, especially changes in humidity or, more dangerously, an influx of particulate," Carney notes.

The data center also uses renewable hydropower, which is common in Germany given all the water flowing down from the Alps. But this doesn't count toward the facility's green rating because the hydropower plant is a preexisting facility. "To be counted as green power, it has to be zero carbon and constructed to provide additional generating capacity to existing conventional facilities," Killey explains.

Overall, Citi says, the Frankfurt facility emits 11,750 fewer tons of carbon emissions and uses 13 million fewer gallons of water per year than comparable data centers. Perhaps most important for other Wall Street firms, Citi also says that the facility's sustainable design was executed at no increased cost over that of more conventional data centers.