50%
Tweet
Amid the current market uncertainty, buy-side traders are rethinking their use of block crossing networks, instead slicing up orders to minimize the risk posed by volatile prices and leaning on the expertise of sales traders.

When Treasury Secretary Timothy Geithner unveiled his highly anticipated bank bailout plan Feb. 10, traders panned the strategy for a lack of details, causing the Dow to plummet nearly 382 points that day. That kind of reaction has made buy-side institutions skittish about leaving block trades waiting in traditional block crossing networks. 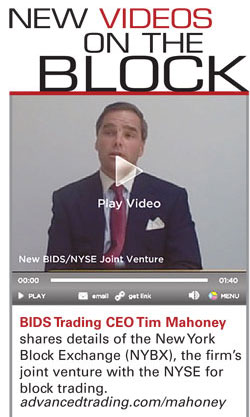 With uncertainty over the U.S. economy and volatility causing erratic intraday price swings in the stock market, buy-side traders say they are seeking fewer block trades while also finding it harder to execute blocks in traditional crossing networks. According to TABB Group estimates, block trading now accounts for 8 percent of total U.S. equity trading volume, down from 17 percent in 2006, which factors in retail, institutional, proprietary and principal-based flows.

Instead institutions are breaking up more orders and leveraging algorithms to work them throughout the day, traders say. At the same time, there also has been a shift to high-speed venues. In turn, however, this is making it even harder to execute blocks.

According to Setzenfand, volatility has changed the behavior of buy-side traders. On one hand, they fear they might get adverse prices if they place standing block orders in a dark pool, where they may need to wait for several hours to find a counterparty, she relates. On the other hand, "If I'm a buyer and the market is going down, I don't want to buy it early because it's going to be cheaper later on," Setzenfand adds. "If I put [a block] in a dark pool, I stand the chance of it all getting done, so I don't want to put it in a dark pool."

Until the volatility subsides, institutions will be leery of doing block trades, suggests a buy-side trader at a public retirement system in the Southwest who requested anonymity. "Because of this volatility, you don't want to be explaining why you bought stock and got the worst price of the day," says the trader, who uses traditional block crossing systems Liquidnet and Pipeline. "I'm still doing some block trading at certain price points on certain stocks, but overall probably less."

When determining how to trade a block-size order, Federated's Setzenfand continues, it depends on the direction of the market. "It's really about traders making directional calls on the stock and the sector and the market, and then deciding how to execute from there," she explains. "If something is coming my way, and I'm buying into the market and the stock is going down, I'm going to do small trades little by little, either the traditional way through a broker or using an algo to slice it."

So as volatility becomes the norm, traders want more immediacy with their executions and have begun to shift order flow to high-speed venues to mitigate uncertainty. According to TABB Group estimates, 70 percent of current trading volume is sent through direct-market-access (DMA) platforms or utilizes algorithms and black-box trading strategies.