50%
Tweet
A systems delay at the CBOE shutdown trading in the big stock index options contracts for three and one-half hours, raising questions about the safety of electronic markets.

Trading at the Chicago Board Options Exchange, the largest U.S. options exchanges by volume, was not able to open today until about 11:50 am central and 12:50 pm eastern time due to a system glitch.

The delay basically shutdown trading at the CBOE, which relies on electronic systems to trade its biggest stock index options contracts. However, it was not clear why the CBOE could not move the SPX to its C2 electronic exchange.

Traders were standing in one of largest open outcry pits in the world, waiting for the SPX based on the Standard & Poor’s 500 index of stocks and the Volatility Index known as the VIX, to begin trading. These are proprietary contracts licensed by Standard & Poor’s, owned by McGraw Hill, which only trade on the CBOE.

“There was no hedging that can be done in the S&P 500 options. You had to use the SPY, the spider, which is one tenth the value, so you have to do a lot more contracts there to get your hedge,” said Jon Najarian, founder and CEO of optionMonster and tradeMonster, who is a former options market maker. 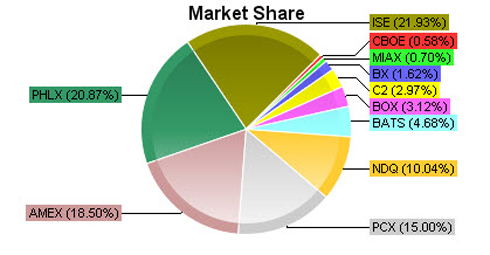 Once trading resumed, however, the volume barely came back, said Najarian.

The VIX usually trades about 650,000 contracts per day but just traded 45,000 in the first 40 minutes after CBOE opened at noon central time, said Najarian. “This is anemic and indicates to me that people headed over to VXX and other contracts," commented Najarian in an email.

Meanwhile, the SPX traded 80,000 contracts in the first 40 minutes today, versus its 30-day average of 900,000 per day and both were not traded for the first three and half hours of the day today, said Najarian.

While the CBOE lost volume today, other exchanges picked up business. Customers who trade options on single stocks such as Apple or IBM or Intel were able to shift to the other 12 electronic options exchanges, since the same contracts trade on ISE, PHLX, BATS, Nasdaq, PSX, AMEX, for example. There are now nine options exchanges operating 12 platforms. 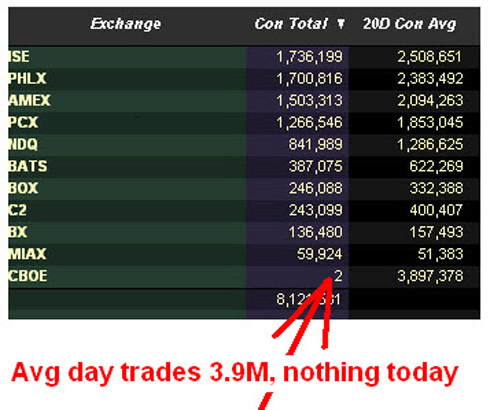 Some of these exchanges picked up market share as traders scrambled to find alternatives to the CBOE.

“There was definitely lost opportunity in the market but it was probably not nearly as costly or detrimental to anybody as to the exchange which lost revenues,” said Najarian. Since hundreds of millions of contracts did not trade, he estimates this was a “seven figure revenue loss.”

The systems delay at CBOE follows a series of technical snafus in electronic markets including the Facebook IPO on Nasdaq and the Knight Capital trading loss due to faulty software code interfacing with the NYSE’s new retail liquidity program. Earlier this week, someone hacked into the Associated Press’s Twitter account, causing high-speed algorithms to trade on fake news, causing the Dow to loss 147 points before stabilizing. According to the WSJ, regulators are monitoring the situation.

While the media speculated that the problem could have been the work of a hacker, this afternoon, the exchange reassured the public that this was not the case. “The malfunction that impacted CBOE was an internal systems issue and not the result of any outside influence,” it said in a press release. The issue, which affected validation of certain orders and the communication of cancel/fill reports, has been corrected,” said the CBOE in press release that was sent out after 3:00 pm. EST.

But earlier in the day it was not clear what was behind the delay and traders were left standing in the pits “fielding calls from angry customers and surfing the Internet for information,” according to a story in the Wall Street Journal.