50%
Tweet
As hedge funds face an onslaught of financial regulations and data reporting requirements from regulators and investors, they're scrambling to aggregate data and calculate risk metrics.

As regulators become much more aggressive about detecting financial risks in the global system and seek visibility into investment returns, hedge funds are facing intense scrutiny and multiple requests for their data. Shocked by the Bernard Madoff scandal, investors and advisers are also demanding more transparency into private funds' financial results, their technology and their governance. 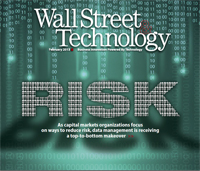 As a result, once-secretive hedge funds find themselves besieged by new requirements for collecting data, calculating risks, financial reporting and records retention. Many of these business processes are new for these funds, and they will need to file reports with multiple regulators in the United States and overseas, depending on which securities or derivatives they trade.

The proliferation of regulations has put pressure on hedge funds not only to collect data on their investments, but to produce risk metrics on their credit and counterparty risks.

Some of the largest hedge funds have already begun to comply under Dodd-Frank with Form PF from the Securities and Exchange Commission. But several other regulatory-driven reporting rules are in the pipeline (see story, next page).

"It's the dawn of a new era for the alternative industry," says Jayesh Punater, CEO of Gravitas, an outsourcing provider of technology, risk analytics and investment research for hedge funds, alternative funds and private equity firms.

The new push for transparency is also a reaction to the financial crisis in 2008 as well as the Madoff Ponzi scheme. "Prior to that, transparency and risk analytics and governance were not in vogue," says Ranjan Bhaduri, chief research officer at AlphaMetrix Group, a Chicago-based open architecture platform that provides transparency for institutional and high-net-worth investors into nearly 200 hedge funds.

However, this is also happening because the alternative investment industry is maturing, says Punater. Institutional investors, including pension funds and endowment funds, are embracing the industry like never before, he says. The demand for transparency is coming from investors; advisers to investors, including fund of funds; consulting firms; and the regulators.

"They're saying we need more transparency, more reporting. We need to understand your risk profile. This in turn is creating a big need around data management," explains Punater. But one of the biggest issues this industry faces is creating scale in terms of expanding their technology capacity to handle growth in new clients, assets under management, geographies, new products and strategies. "They need to scale differently than the sell side because they don't have unlimited resources," he says.

While data management used to be more a humdrum activity, hedge funds are looking at dealing with data as a critical issue within their business model. It's not only defensive from a risk and reporting angle, but it can be offensive from the ability to help generate alpha, says Punater. By maintaining proprietary data on an investment theme, management of front-office data is seen as key to investment returns and can yield a competitive advantage, says Gravitas' CEO. The defensive part involves producing reports on performance and concentration risk, which hedge funds must do to cater to both investors and regulators.

However, many hedge funds are still wrestling with the data and reporting requirements of Dodd-Frank's Form PF, which stands for private funds and applies to SEC-registered investment advisers. "It's a massive data aggregation process," says Hannah Correll, a director at Advise Technologies, a software-solutions provider for global regulatory compliance. "That said, there are a number of interpretations in the process as well."

"Some of the data has to be aggregated, so not only are customers pulling data from their administrators, counterparty questions, borrowings, etc., they're really having to go to multiple sources to collect this data," Correll says. Some funds have hired risk management vendors to help them with risk calculations, she adds, citing RiskMetrics as an example. When a customer has mutual clients, RiskMetrics is able to give clients a data file that feeds seamlessly into Advise's Consensus RMS. Some hedge funds are grappling with the challenge of dealing correctly with tons of data, because they have never before dealt with massive amounts of data for reporting purposes.

"Technology, transparency and risk go hand in hand," says AlphaMetrix's Bhaduri. However, transparency can lead to information overload, he cautions. "You really need to have technology that synthesizes information in an intelligent way," he says. AlphaMetrix takes daily files from the prime brokers of the hedge funds, which it then reconciles against what the hedge funds' records show was traded. "It's trust but verify," explains Bhaduri, who sees the new push toward transparency, risk monitoring and risk analytics as a reaction to what happened with the Madoff fraud. For example, his firm maintains a 24-hour risk desk to monitor hedge fund trading.

AlphaMetrix feeds that data into its risk system, he says, noting that risk analytics and risk reporting are all about data integrity. To prevent a Madoff-type fraud, AlphaMetrix is seeing all of a fund's positions and making sure that the trades are congruent to what they're supposed to do, he says. The firm has a suite of statistical metrics that it applies. But the analytics can also be as simple as "counting contracts," he says.

So what types of data do hedge funds need?

According to Gravitas' Punater, hedge funds need to organize three types of data: investment data, which includes their own positions; client data; and their own company data, which could be all the companies they would consider investing in as well as market data on those companies. This could be for equities or credit derivatives, if they are investing in illiquid instruments. All of this data can approach terabytes in size, he says.

"A big part of running a risk system is data management," concurs Kirk Wylie, CEO at OpenGamma, an open source risk management and analytics platform that caters to hedge funds. A big part of how firms set up their risk environments is making sure they have the right data processes and that the data is free of mistakes, he says. "It really is a case of garbage in and garbage out," says Wylie. For instance, a lot of the data is from their portfolios, he says. Firms must reconcile their positions with their counterparties to make sure they have the right trade details. "To meet the risk requirements, they have to maintain their own data to a suitable standard," Wylie says.

In addition to internal data and data from counterparties, there is a lot of data that has to be purchased. For instance, securities reference data, such as the coupon of a bond and maturity, is important. Funds will also need to purchase other historical data, real-time data and holiday data, notes Wylie. Very often, up to 50% of hedge funds' annual technology spend can just be on data, he says.