50%
Tweet
The Bernard Madoff scandal and the credit crisis have highlighted the need for major changes at the SEC.

Related Sidebar: Which Regulator Does What on Wall Street?

The Securities and Exchange Commission has become accustomed to scrutiny and blame as the once mighty regulator has taken a major stumble. The fallout from the credit crisis and the SEC's failings surrounding Bernard Madoff's alleged $50 billion Ponzi scheme have shattered investor confidence in the regulator and the markets in general.

In order to rebuild investor confidence, the regulatory body is in for some major changes. But what would the ideal SEC structure and any necessary regulatory changes look like? Should the SEC have more or less power? Does it need more resources, or simply a new direction? 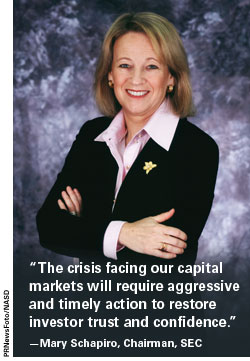 It's no secret that the SEC's new chairman, Mary Schapiro, is committed to change, and the industry is anxiously awaiting as she oversees the SEC's transformation into a "21st-century regulator," as many have come to call the idealized new regulatory body. In a February speech -- one of her first as SEC chairman -- as part of the Practising Law Institute's "SEC Speaks in 2009" program, Schapiro admitted to weaknesses and gaps within the SEC and said the regulator must recommit resources and talent to build confidence in the system. She added that this rebuilding would require self-evaluation and taking an honest look at the regulator to see what can be done better.

Schapiro also took Wall Street to task for its role in regulatory changes going forward, calling regulation a "two-way street." She noted that the regulated need not wait for the regulator's coming reforms. Schapiro called for a new era of responsibility on Wall Street and throughout the markets to "ensure that wrongs don't occur in the first place."

Judging from Schapiro's first steps, she's seeking to make the SEC a more nimble organization that can act quickly to right wrongs. One of her initial changes intended to empower the SEC's Division of Enforcement was to remove the "penalty pilot" program. The program required enforcement staff to get special approvals from the Commission in leveling fines against public companies that commit securities fraud. According to Schapiro, these special procedures often delayed the process and discouraged staff from pushing for financial penalties.

Schapiro also made changes to the "formal orders of investigation" process that guides the launch of an investigation, directing the SEC to approve these formal orders in a timely manner and, when appropriate, to initiate investigations on the authorization of a single commissioner rather than to convene a meeting of all five commissioners, which could take weeks.

Further, Schapiro announced the formation of the Investor Advisory Committee to ensure that the regulator is in touch with the issues that most concern investors, a move that many in the industry have been pushing for. But the SEC has not elaborated on who will be invited to participate or how the committee will operate.

While an SEC spokesman declined to comment on any possible changes at the SEC, it is widely believed that Schapiro's early moves are an indication of the changes to come (see "SEC Chairman Mary Schapiro Outlines Priorities" for more on potential changes at the SEC). The spokesman would not provide access to SEC officials, instead referring Advanced Trading to recent speeches by SEC officials.

Back to the SEC's Roots

As the SEC continues to get slammed for its ineffectiveness and fundamental changes to the regulator seem inevitable, it's interesting to look back at the original Commission and its roots, which took hold during yet another time of economic woe. Congress established the SEC with Section 4 of the Securities Exchange Act of 1934. The regulatory body was formed at a time of great market turmoil in the U.S. -- the Great Depression was under way following the stock market crash of 1929 and unemployment was skyrocketing.

The president at that time, Franklin Roosevelt, appointed Joseph Kennedy Sr. as the first chairman of the SEC. Kennedy had made his fortune in the stock and commodity markets and was a fitting choice to run the securities regulatory body.

"He was the biggest short seller in the 1920s crash and one of the biggest moneymakers in the 1929 crash," explains Michael Levas, founder, CIO and managing member of Olympian Capital Management. "No one understood the markets better than Joe Kennedy; he knew manipulation that had gone on and enacted a lot of the laws aimed at preventing it."

According to Levas, appointing Kennedy "was putting the fox in charge of the chicken coop." In other words, the regulator's first chairman knew the ins and outs of the markets and exactly what needed to be done to detect and deter fraud.

Fast-forward 75 years and it seems the adage has been reversed. In fact, during a hearing in February on Capitol Hill, Harry Markopolos, the whistle-blower who tried for nine years to alert the SEC to Madoff's scheme, called the SEC "a group of chickens tasked with catching foxes."

Among the many complaints aired at various hearings in Washington is that the SEC has become "over-lawyered" and doesn't employ enough experts with financial industry backgrounds and specialties in complex instruments, such as derivatives. Internal areas that have been singled out for needed improvement include staff compensation and training, the examination process, the handling of tips and whistle-blower complaints, greater collaboration and communication with other regulatory bodies, and expanding registration guidelines.