The app provides Fidelity customers access to their brokerage account watch lists, account information, real-time quotes and the ability to trade stocks, ETFs, mutual funds and options. All investors, whether or not they are a Fidelity customer, will be able to view news, market information and quotes.

The app gives Windows Phone users the ability to pin individual securities directly onto their phone’s Start Screen for continuous quotes via the Windows Phone Live Tiles. These Live Tiles update automatically in real time, and depending on the movement of the security, the Live Tile is colored red or green. When set to the medium or large size, the Live Tile will also flip to show the security’s relevant news stories. 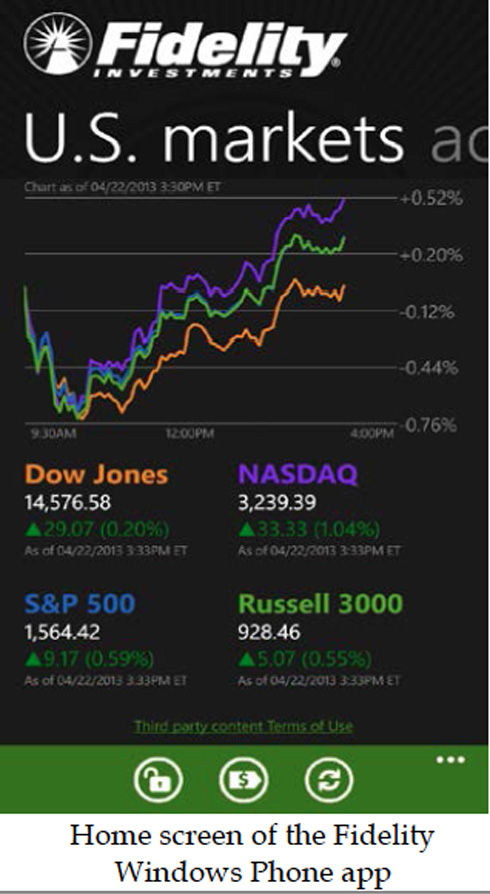 Fidelity spokesman Robert Beauregard says the financial institution’s decision to focus on Windows 8 was driven by demand from users themselves. “Windows Phone users have had a vocal presence on our social media sites on Twitter and Facebook for the last several months asking for a brokerage trading app. That said, we believe the number of Fidelity customers using a Windows Phone is representative of the Windows Phone market share reported by comScore MobiLens -- roughly 3%,” he says.

As part of Fidelity’s mobile focus, the firm has already developed OS-specific apps for iPhone, iPad, iPod touch, and Android, as well as Fidelity Mobile app that works across all smartphones, including BlackBerry, Beauregard notes. Key features in the Windows 8 app include a U.S. market summary showing quotes for the Dow Jones Industrial Average, NASDAQ Composite Index, Russell 3000 Growth Index, the S&P 500 Index and a comparative intraday price chart for the four indices.

Employees with a retirement plan managed by Fidelity can also use the new app to check positions and balances in their retirement plans, and investors serviced through Fidelity’s Stock Plan Services business can view their stock option balances.