50%
Tweet
The organizational mechanisms are in place. Now it's time for the financial industry professionals to provide guidance on a global coding scheme that is fit for all the purposes intended.

The Unique Product Identifier (UPI) sitting side-by-side with the Legal Entity Identifier (LEI) is the promise made by regulators to the industry when the SEC, CFTC, and Office of Financial Research (OFR) first issued their consultative papers in 2010. They had hoped for a common solution for both, a solution that would replace all proprietary codes and eliminate mapping over time. The benefits to the industry would be significant. We are a long way from fulfilling the promise unless the industry itself accelerates its implementation. Self-interests should be replaced with common interests to reap the benefits promised by regulators.

Regulators set the tone at the top
The SEC on November 17, 2010, mirroring the other three US agencies, wrote:

Without such unique identifiers, and the ability to aggregate data across multiple markets, entities, and transactions that they would provide, the enhanced monitoring of systemic risk and greater market transparency that are fundamental goals of Dodd-Frank cannot be fully achieved. Such identifiers would also have great benefits for financial transaction processing, internal recordkeeping, compliance, due diligence, and risk management by financial entities.

A common set of reference identifiers for participants and products could yield significant efficiencies in both the public and private sectors. Information about financial firms operating in different functional areas and different jurisdictions could more readily be identified by regulators. In addition, financial firms could eliminate the use of multiple proprietary reference systems and move to a single, widely accepted system.

With the G20’s Financial Stability Board (FSB) having taking on the responsibility from the OFR to define the first of these identifiers, the LEI, the FSB wrote similarly on June 8, 2012:

There is widespread agreement among the public authorities and financial industry participants on the merits of establishing a uniform global system for legal entity identification.

It would reduce operational risks within firms by mitigating the need for tailored systems to reconcile the identification of entities and to support aggregation of risk positions and financial data, which impose substantial deadweight costs across the economy. It would also facilitate straight through processing.

Now with such a headwind by a global standards body of the stature of the FSB and its extensive sovereign regulator members, it has been left to the industry to implement solutions.

In the FSB’s most recent report, “Requirements for Swaps Data Aggregation in Trade Repositories,” released on Sept 19, 2014 it stated its objectives:

…it is critical for any aggregation option that the work on standardization and harmonization of important data elements be completed, including in particular through the global introduction of the Legal Entity Identifier (LEI), and the creation of a Unique Transaction Identifier (UTI) and Unique Product Identifier (UPI).

The organizational mechanisms are in place, set up initially by the FSB but now turned over to the innovative minds of financial industry professionals to provide guidance on a global coding scheme that is fit for all the purposes intend.

It is not what it appears to be
First, we should also be careful to suggest that some asset classes are already accommodated with their unique, unambiguous, and universal codes. While we make do with what we have, the ISIN being one example, the existing coding systems require mapping tables that add costs and risk to the process and inhibits STP and real-time processing.

Some simple rules on unique identifier code construction
First up is the need to differentiate an identifier from its reference data and the application software that act on both. An identifier should have the minimum set of digits to accommodate its mission. In the case of the UPI, a requirement is for a minimum set of digits to identify the instrument or contract and its manufacturer or issuer. As can be seen in the IBM example above, there is no common issuer represented in the multiple codes now used to identify products making aggregation impossible from the code itself.

In the case of the LEI that mission is to uniquely, unambiguously, and universally identify a business entity active in the financial markets and its parent controlling entity. That was the problem that finally focused regulators on the industry’s data issues, its first attempts to fix the plumbing. 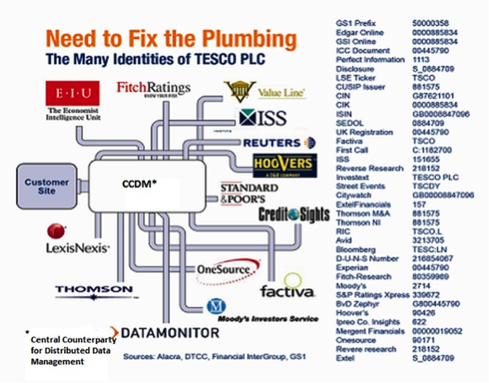 The missing identifier
Both the LEI and the UPI undergo changes throughout its lifetime. That change is identified by a financial event such as a merger, acquisition, bankruptcy, spin-off, etc. Such an event needs its own unique identifier, its own reference data and the application software that act on the LEI and the UPI to update and maintain both. We call this the Financial Event Identifier (FEI). No regulator has yet come to understand this needed part of the global identification scheme

The integrated global identification system
See below, our attempt to define what the regulators promised and the industry needs. We call it the U3 (Unique, Unambiguous, and Universal) Global Identification coding scheme. It conforms to all known standards to date (ISO LEI 17442:2012) and to further expected UTI  and UPI requirements. It was first presented to the SEC, CFTC, and OFR in formal comments to their consultative papers noted above. It was subsequently presented to the FSB in response to similar consultative papers. 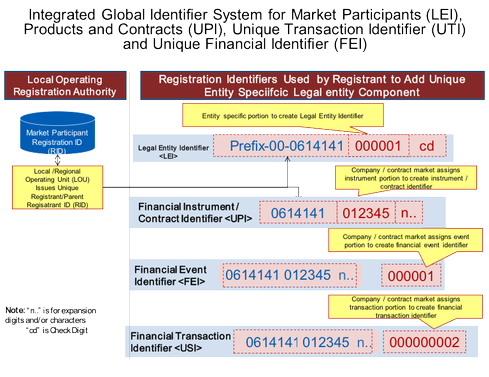 For additional research on this topic see FinancialinterGroup.com.