50%
Tweet
With 21 swap execution facilities, and slowly increasing volumes, the marketplace is perfect for consolidation.

It’s been a quiet summer for swap trading venues. SEF trading has been mandatory for many over-the-counter derivatives, mainly credit indexes and interest rates, since mid–February. Yet the transition from opaque voice trading to SEFs (swap execution facilities) has been evolving slowly.

While 21 SEFs, including big players and startups, have registered with the Commodity Futures Trading Commission (CFTC), analysts are predicting that a wave of consolidation may hit the sector over the next year.

In a recent second-quarter earnings call, Rick McVey, CEO of Market Axess, whose SEF is among the leading players in credit derivatives, commented that volumes had increased as compared to the first quarter, but it was not enough to make the SEF business profitable. “Aggregate CDS SEF volumes are lower than expected, and regulatory costs to operate SEFs are far greater than current SEF revenues,” McVey told analysts during the July 23 earnings call.

Analysts say it's too early to pick winners and losers because trading on SEFs didn’t become mandatory until mid-February and because package trades didn’t begin to phase in until mid-May. “Because there is so much of the market that isn’t on SEFs, we can’t say definitively somebody has ownership,” says Kevin McPartland, head of market structure research at Greenwich Associates. “Many don’t believe the infrastructure is ready,” although the industry has “certainly made big strides.” In addition, some funds whose legal entities are based offshore, are declaring themselves non-US, which enables them to trade off SEFs. 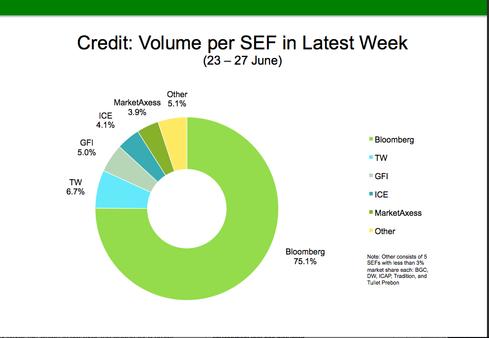 Buy-side firms could be staying away for a few other reasons.

“From a compliance perspective, SEFs have only been given temporary approval by the CFTC,” says Will Rhode, global head of capital markets research at the Boston Consulting Group. At the same time, SEFs are many and varied, in that some are interdealer brokers, others are dealer-to-customer electronic platforms, some are created by exchanges, and others are startups.

Incumbents get bigger
So far, the largest players, namely Bloomberg and Tradeweb, are capturing the most market share, much more so than startups.

Bloomberg’s SEF had 83% share of the notional volumes in credit index derivatives in July, while Tradeweb had 8.23%, ICE had 4.2%, and MarketAxess had 2.4% of notional volume, according to Clarus Financial Technology.

From Aug. 1 through Aug. 12, Tradeweb garnered 13.3% of interest rate derivatives volume on D2C platforms, while Bloomberg had 20.2%, according to Clarus.

“Bloomberg and Tradeweb were the primary dealer-to-customer venues in the pre-SEF world and are still doing the bulk of the dealer-to-dealer SEF volumes as well,” noted an industry observer who spoke anonymously.

“Bloomberg is doing quite well. Their fee structure is very low and straightforward, and the market seems to like their model,” says McPartland of Greenwich Asssociates.

Some sources cite Bloomberg’s low-cost pricing model for SEF trades: It charges $10 per SEF trade, which is magnitudes less than its electronic rivals. Bloomberg is able to leverage its dominant position on the trading desktop.

“Bloomberg runs its SEF as a utility. They’re already in the workflow and on the desktop; they already are a known entity,” said an industry source, who requested anonymity. “Bloomberg may not see the SEF as a revenue stream, but see it as strengthening its value proposition of selling data and terminals,” the industry source suggests.

Another factor in the mix is that central clearing and electronic trading under Dodd Frank is more expensive for the buy side. “One of the major changes for the buy side is they used to pick up a phone and ask for a price and execute for free. There was no explicit fee for execution. Now, with SEFs, there is,” says Rhode.