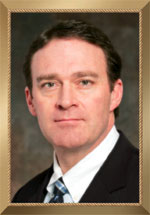 $643.4 billion in assets under management.

WHO WAS YOUR MENTOR?

I got to meet Ed Williams, who was one of the first CIOs in the country, because he was running an internship program with Penn State. In the late '70s he already had a vision of separating business analysis and systems analysis and had a great perspective on how important business systems application development would become.

WHAT WORK EXPERIENCE HAS HAD THE MOST LASTING IMPRESSION ON YOUR CAREER?

AIG, because it was such a large and innovative entrepreneurial company. Just to keep up with the growth that it experienced, I got increasing responsibility while I was there. That's where I learned the most and had the most success. And, obviously, I made some mistakes and learned from those.

Maintain and further reduce expenses within the call center. There's a large integrated voice response and computer telephony integration that goes in this year. The IVR system answers many questions that a customer service rep answers today, and the pass-off to the rep is handled more smoothly with data surrounding the customer interface.

To get rid of paper and smooth out some workflows on the front end in new business sales and customer service. The image and intelligent character recognition project is replacing a lot of paper that comes in for new business contracts and sales agreements for our life and annuity products. It should reduce some new business sales times by as much as two or three days.

Next year will have a retail and wholesale sales channel focus that will concentrate on ease of doing business with AXA. We're fairly good at getting business in the door. As we go to our internal sales force and go to the outside world, if you're not easy to do business with, they're going to go elsewhere.

We'll probably take the image and workflow project one step further. Today, we're just going to load up the images and push them to the workflow. But next year we're going to take the paper forms that come in and convert them to an electronic format that will fly through the system even faster than the images do.

600, trimmed down from last year through offshoring.

The traditional on time and within budget is still important and valuable. Beneath that we've added Six Sigma methodology with which we are measuring the defects that are installed with the system. We're currently at about a three-sigma defect rate.
Vision: The Next Big Thing

I'm a big believer in product rules configuration both for product and for distribution. The competition that figures this out within the next five years will be the ones that take the market. We need to figure it out in the insurance industry. I believe that there will be more products that come out that are nonproprietary but give you a nice framework within your market area. If you don't have that in place and don't realize you need to do that now, I think you'll be in trouble.