50%
Tweet
Financial firms must be more efficient in detecting and responding to cyber threats.

Prominent organizations are favorite targets of cyber attacks. For instance, many U.S. banks have already been high-profile victims. But it is just the tip of the iceberg. As the world becomes ever more connected, cyber threats are rapidly escalating into a major issue for many organizations across different industry sectors, including the financial services industry.

According to a recently released report (PDF) from the Ponemon Institute, U.S. organizations have the dubious honor of ranking first worldwide with the average data security breach costing $5.4 million. Healthcare, financial, and pharmaceutical industries had higher than average costs coming in at $6.7 million, $6.2 million, and $6 million per incident, respectively.

What Is The Cyber Response Curve?
While working with commercial and government organizations, BAE Systems Detica has seen a multiplication of highly sophisticated attacks. The cyber response-curve is a concept we have designed to evaluate an organization's readiness to respond to cyber threats and enables them to view how they could improve their response, based on three factors: time between the start of and detection of an attack; level of compromise; and how long it takes to make an informed decision. It is premised on our observations over the last few years of how different organizations have responded to targeted attacks.

The cyber response-curve maps out three critical elements of a response: 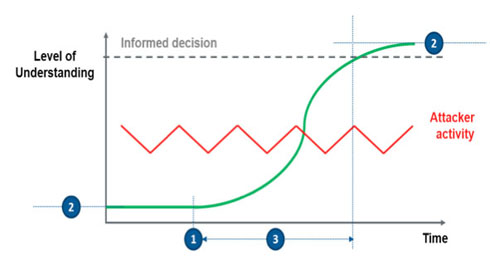 Legacy Response
Below are some of the observations about how different level of maturity and approaches can affect your cyber response-curve:
1. Time to detect: 18 months
2. Level of understanding: Poor -- since network architectures are not well understood and the business impact of attack are not considered
3. Time to informed decision: Weeks to months

The standard legacy systems used by most organizations are not keeping pace with the evolving threat landscape. Many companies only become aware of an advanced attack when they are notified by a government agency or another third party.

When investigating such an incident, the technical specialists must split their time across the numerous tools, collecting small pieces of information from each and manually piecing together the details of an attack.

Organizations operating in this manner often respond too quickly before building a good enough understanding. This can cause the attacker to increase their level of activity, while accidentally putting the investigating team back to the start of the response curve. The business exposure actually goes up, not down, as a result of their actions.

Efficient Investigation
Equipping a technical team with solutions powered by the right technology dramatically compresses the cyber response-curve, both in terms of the time to detect and the rate of understanding.

The full benefit to the technical team is realized by bringing together disparate data sources, linking and enriching entities with open- and closed-source information, pre-computing frequently asked questions and sharing collective knowledge.

Business 'Aware' Decision Making
By bridging the business world with that of the technical team in the security operations center and giving them a common language and tools, allows teams to not only squeeze their cyber response-curve but also to significantly raise their level of understanding by considering more than just the technical details of an attack.

What You Can Do Today
The more preparation you do to be able to squeeze the cyber response-curve, the better able you are to deal with an attack. In summary:

Are you ready to squeeze your cyber response-curve?

About The Author:
Colin McKinty leads BAE Systems Detica's cyber business in the Americas. Colin joined Detica in 2001 having completed his PhD at the University of Surrey (UK). In his early career Colin led various information exploitation projects in the UK and US. He went on to run Detica's federal business in the US before taking on his current position in 2012.