But measuring trader alpha and effectively using TCA on a daily basis can only be achieved with a behavioral change on the trading desk and beyond, contends Jason Lenzo, head of trading at Russell Investments. According to Lenzo, TCA becomes an effective tool when it is part of the overall process and involves more communication and interaction at all levels of the trading process. 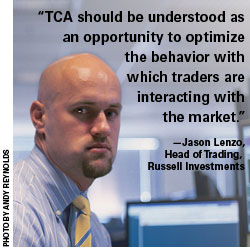 "TCA should be understood as an opportunity to optimize the behavior with which traders are interacting with the market," says Lenzo. "There has to be a shift of consciousness to viewing TCA as a tool because there are too many who view TCA as just another report that has to be filled out every month. It can achieve so much more."

While most traders don't necessarily have a lot of input into the investment process, TCA is a way for them to measure results and ultimately learn how they can do their jobs better, Lenzo adds. "That's the trader's goal -- the ability to discover price and liquidity within the context of the goals of the clients -- and there needs to be a way to delineate that quantitatively," he says.

Lenzo compares the state of TCA today to where algorithmic trading was a few years ago when it first hit the scene and traders saw it as antagonistic. "It wasn't clear to traders at the time that those were great tools to help them do their jobs better. But I challenge you to find a trader today that doesn't use some type of server-based execution," says Lenzo. "TCA acceptance will follow in a similar fashion as people understand that if its properly deployed, it's a great help in the measurement of how you're doing."

The two main changes Lenzo foresees for the next generation of TCA are broader acceptance and usage on a real-time basis, as well as more forward-looking TCA -- "TCA not based on historical norms and market averages but based more on current market conditions," he explains. "Measuring results in real time as you're trading and making adjustments and changes accordingly."

But getting buy-in to the behavioral change and the use of TCA in real time as a tool to see where traders are adding value first means selling people on the idea that it's worthwhile. Unfortunatley, "People view this as something that is combative and not done in a collaborative manner -- you're grading someone," says Lenzo.

What's Next for TCA?

According to Clarke Roberts, director in the portfolio and automated trading group at Merrill Lynch, the use of TCA for intra-day tactical analysis -- a less disruptive but equally transformative application of TCA compared to measuring trader performace -- will be a hot area. He describes a scenario in which firms use TCA to adjust to market conditions and overall performance throughout the day and change a strategy on the fly. But, Roberts adds, he also expects the longer-term TCA applications to be utilized more and more.

Beyond that, Roberts sees the next generation of TCA used on a global scale and even across asset classes. "The next step is incorporating all desks -- cash trading, portfolio trading, equity derivatives and other asset classes -- into not only regional but also global TCA reports," he predicts.

TABB Group's Sussman agrees. "The data is becoming more widely available on a global basis and technology is being deployed across asset classes and geographies," he comments. "This combination of data and technology for trade capture is the foundation necessary for TCA beyond U.S. cash equities."

According to Scott Burrill, partner and managing director, global head of consulting and analytics, at Rosenblatt Securities, incorporating TCA as a core part of the investment process is a key to the buy side's success going forward. "From an institutional perspective, I see TCA moving upstream, feeding through the life cycle of the investment idea," he says. "It is of even greater importance now as the markets have become so fragmented and there are so many disparate ways to execute trades. You have to understand what the underlying costs of participation in these venues are."

Ian Domowitz, managing director of ITG's analytical products and research group, says that the next big thing in TCA isn't actually anything new, but rather "proper use of the concept." According to Domowitz, this means spanning the life cycle of the trade and providing analysis at every step of the way.

"Transaction cost analysis is not something you do only at the end of the day or quarter. Measuring, reporting and analysis are an essential part of the trade process, and the results of the analysis must be incorporated at various stages of the investment process," says Domowitz. "Where does TCA enter at the portfolio construction phase with respect to the generation and evaluation of the strategies at the pre-trade stage? Where does it enter during the execution process? Then given all of that, how do we measure and improve that?"

As for future TCA benchmarks and ITG's PWP offering, Domowitz says, clients are leaning toward customization. "There are roughly 32 benchmarks available for any user of TCA, and more than 100 done specifically for individual clients," says Domowitz. "PWP was driven by client discussions and has a variable time horizon, which is appealing, and it's very flexible -- users can adjust the participation rate to different sensitivities."

Still, Hugues Deroubaix, director of client connectivity at GL Trade, hopes to see industry consensus around benchmarks in the future. "Something will emerge out of the crowd to be considered a standard benchmark, because if we don't have that, we can't really evaluate trader performance," he says.