Related Sidebar: TCA by the Numbers

Transaction cost analysis (TCA) means many different things to different firms. Whether it's used on a minimum level to measure best execution for compliance reasons, applied across the entire life cycle of a trade or leveraged to help determine trader compensation, every firm is unique in the way it uses or relies on TCA. 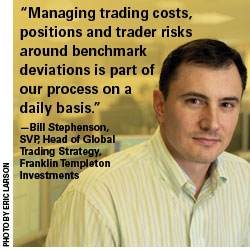 Which, of course, doesn't make it easy to get to the bottom of what exactly the "next generation" of TCA might look like and how the buy side will continue to incorporate TCA into the trade process.

Bill Stephenson, SVP and head of global trading strategy at Franklin Templeton Investments, however, believes he may have found the future of TCA. Stephenson uses a new TCA benchmark that he hopes might one day become an industry standard. With more than $600 billion in assets under management, Franklin Templeton is actively working to implement a next-generation TCA strategy based on a "value add" benchmark that, Stephenson says, is efficiently helping his firm quantify trader alpha.

"We have a highly structured execution process and a strategy that can be customized to different portfolio needs," explains Stephenson. "It's the goal of the trader to capture or preserve short-term alpha."

He adds that traders ultimately accomplish this by balancing the need for liquidity with price risk. "We view liquidity as one of our toughest challenges but also one of our biggest opportunities," Stephenson says.

But gauging whether a trader is balancing these two tricky sides of a trade while still aligning with the firm's investment process is something with which Stephenson traditionally had grappled. In particular, he says, he wanted a way to evaluate the performance of the firm's large orders, which generally take days or even weeks to complete.

Years ago, Stephenson relates, he had worked with Franklin Templeton's TCA provider, State Street, to build an in-house global TCA system, but eventually figured out he wanted a Web-based system so he could log on and download reports directly. Previously, he had been receiving very large e-mail files each day with the data-heavy reports, which was cumbersome. "We have trading desks around the world, and it's much easier to log in and pull the data down," he says.

In early 2004 Stephenson made the switch to ITG as his TCA provider, and they worked together to build on Franklin Templeton's existing "value added" benchmark, which Stephenson calls a multiday VWAP variant-type of benchmark. Stephenson notes that he also had been using ITG's Average Cost Estimator (ACE) for forecasting trade costs. But while it was good for smaller size trades, he contends, ACE didn't work as well for large trades. "The goal was to have a target percentage of volume over the life of the order, and to measure the trader's discretion around that benchmark," says Stephenson.

Accoding to Stephenson, ITG then came to him with a new benchmark they had termed "Participation Weighted Price," or PWP, which was similar to what Franklin Templeton had been using but with less-complex calculations. In addiiton, ITG could standardize it for other clients, as well.

"It is based on a target participation rate over the life of the order, so if it was 10 percent participation on a 10k share order, our price would be measured against the VWAP of the next 100k shares that trade in the market," explains Stephenson. "Once 100k shares trade, the benchmark is static. This may take 30 minutes or two days, ... and we may execute a 30-minute order over three minutes or three hours. PWP will calculate the trader's value added to that trade based upon this achievable price given the benchmark strategy."

The PWP benchmark also is customizable, Stephenson points out. "Different portfolio managers have different participation targets -- some might be aggressive, some might not -- so it can be customized," he says.

Stephenson adds that balancing the short-term alpha capture versus the longer-term investment strategy is always important. "PWP is not the be all and end all, but generally, over time, it aligns with our overall investment strategy," he comments.

"We believe best execution is a predictable execution," Stephenson continues. "In other words, our process is structured, we can identify and manage our risks, and we can deliver results within an expected cost range in any market under most market situations. Managing trading costs, positions and trader risks around benchmark deviations is part of our process on a daily basis."

Adam Sussman, research director at TABB Group, says other buy-side firms also are moving more toward TCA for measuring trader alpha. "They are looking at the implicit costs incurred during these trades, and they're looking over a period of time," he says. "They're also comparing the types of discretion a trader may be given -- timing, price, is the portfoio manager putting soft limits on the order, etc."

Sussman adds that by looking at TCA over a period of time and measuring "trader alpha," firms then can look for trends and better see porcess changes that might be necessary to improve overall performance. Ultimately, effectively leveraging TCA in this way leads to a more holistic approach to the investment decision and trading process, according to Sussman.

"Firms need to look at it as a more fluid process -- from the timing, to the pricing and urgency, and then how that is commuicated down to the trader," he says. "All of these things need to be taken into account."

Sussman adds that most larger shops are making strides in this area, leveraging TCA to improve their entire investment process. "Everyone agrees that if you're a firm of a particular size, you need to make the process more fluid, and there needs to be a feedback loop among the portfolio managers and traders," he says, adding that a lot of firms already have begun making progress in this area.