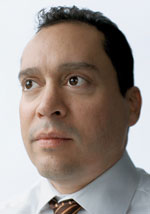 SIZE OF FIRM:
Market capitalization of more than $9 billion.
PREVIOUS POSITIONS:
Developer, ICE; senior engineer, Energy Control Systems, Harris Corp.
EDUCATION:
B.S., University of Florida
WHAT WORK EXPERIENCE HAD THE MOST LASTING IMPRESSION ON YOUR CAREER?
When we first started ICE back in early 2000, we had been looking at building a power platform. Then we decided to build out metals, OTC, natural gas, power and oil, etc. We needed to have a whole system built out by the end of the summer. We only had nine or 10 people total in the company at that point. We had breakfast, lunch and dinner at the office for a long time. We were also trying to build up our team and hire people. It was a stressful and tense year, but we delivered.
FAVORITE HOBBY?
I play third base in a competitive national baseball league on the weekends.

A large portion of cap ex.

No project is outsourced 100 percent.

We go by our business performance overall. The technology is very closely tied to the business results.

WEB 2.0 technology will start to make its way into the industry, such as user-provided content and new user interface technologies. As mobile computing becomes more predominant, we will see a change in the way users interact with computers and devices to become a more dynamic experience.
TOP 3 CURRENT PROJECTS

Later this year we are taking on the Russell 1000 and 2000 markets exclusively. The only place you will be able to trade those is on ICE, so we will need to keep making performance and capacity improvements. At the end of last year we had improved our latency down to an average of 3 milliseconds across our markets even though transaction rates are doubling just about every six months. We constantly upgrade our hardware, software and networks.

A big issue this year is to continue to expand the NYBoT systems for performance, capacity and reliability. We are rearchitecting the post-trade management systems for that acquisition, and we will be releasing a new version of those systems.

We started ICE Clear Europe in the middle of last summer and are scheduled to launch later this summer. That is a major initiative with multiple projects. It's an entirely new clearinghouse that will clear all of our energy products and energy futures.
2009 INITIATIVES

We are always looking to continue to improve and exceed our performance. That will be ongoing, especially by the end of this year as we add the new Russell volumes.

We are building out an entirely new options trading platform that we will deliver later this year and early next year. We are adding a new Mass Quote facility and the ability to do user-defined spreads. We acquired YellowJacket this year, which has an interesting front end for options trading.