From the Jan-Feb 2006 issue of Advanced Trading

The goal of the new business unit is to service plan sponsors and transition managers that are seeking fixed-income execution, as well as fixed-income investors who want agency execution, relates Pimental. This includes Bear Stearns' transition management unit, which likely will leverage the new group's services. Over the course of the first year, Pimental projects, the group will trade in the neighborhood of $10 billion to $15 billion par, or face value, in fixed-income securities.

The move comes on the heels of the news that Vic Fontana, president of First Principle, joined Investment Technology Group to bring fixed-income transition management services to ITG. Pimental says the team had many career options, including joining Fontana at ITG. But working for Bear Stearns was the most attractive opportunity, he believes, because of its scale and reputation in fixed-income trading. 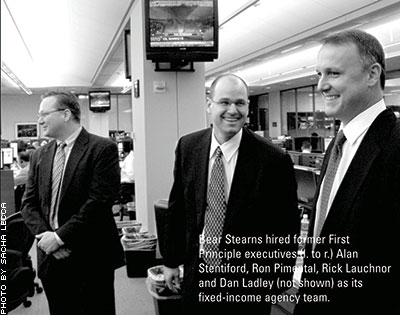 As a result, Pimental asked Bear Stearns' Paul Friedman, a senior managing director in fixed income, to consider hiring the First Principle team. "Suffice it to say we were looking at various opportunities and Bear Stearns made the most sense - it gave us the opportunity to establish a fixed-income agency at a major fixed-income shop at a top-tier, bulge-bracket firm," says Pimental.

According to Pimental, the ITG effort differs as it is focused on transition management with fixed income as a piece of that; the Bear Stearns team is focusing specifically on fixed income agency execution.

First of Its Kind

To the team's knowledge, Bear Stearns now is the first broker-dealer to have a fixed-income agency business. Its competitors primarily are custodian banks and independent boutiques, notes Lauchnor. One of the unit's biggest competitors is Bank of New York, which has acquired several smaller boutiques over the years. Another is Texas-based boutique Capital Institutional Services. "Many of the boutiques don't exist anymore as they have been acquired by larger players," Lauchnor adds.

"On the surface, it sounds like it's an attractive offering," says Matt Bienfeng, senior analyst at TowerGroup. "Bear will offer more transparency to clients. I dont think they think they will gain the volume that a State Street has, but they'll get a nice comfortable piece of the action."

"We'll be looking at technology to bring better and faster liquidity to our clients," Pimental says. The group will use the large fixed-income shop's proprietary systems as well as some of the available external trading products such as TradeWeb and MarketAxess.

Asked if the unit would be hiring, Pimental says, "As the business develops, we will make those decisions. I hope that we will."