0%
Tweet
17% of surveyed New York-based organizations grew more than 50% last year. 26% predict more jobs will be added over the next year.

New York's future as a hub of technology innovation is looking bright, concludes a recent survey conducted by the New York Technology Council (NYTECH) and WithumSmith+Brown in the first quarter of 2014.

The majority of respondents reported a growth in headcount from 2012 to 2013, and anticipated even greater growth in 2013 to 2014. Similarly, reported change in revenue was overwhelmingly positive, and was expected to grow considerably higher.

The results were more positive than expected, says Erik Grimmelmann, president and CEO of the New York Technology Council. "The extent of the enthusiasm for where things are headed is striking." Only a few years ago, there was not much of a tech scene to speak of in New York, but the city is attracting more people who want to be closer to the big clients, and in his opinion, escape the suburbs. 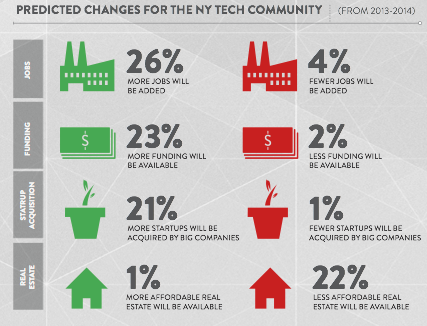 One common theme he sees is firms struggling to find the qualified and trained talent to grow their businesses. Still, jobs are expected to grow 26%, which leads nicely into the one blemish on the city's growth track: real estate. Nearly a quarter of respondents believe less affordable real estate will be available. "Of course, New York is still at an advantage there," says Grimmelmann. "San Francisco can't build high density there without fundamentally changing character of city. NYC doesn't have that problem, it has a culture of building … so one assumes the law and supply of demand will lead to more buildings and capacity."

Financial technology firms represented 6% of the survey respondents, but the niche market is seeing tremendous growth overall in startups and in larger companies. Businesses in NY's FinTech have the opportunity to work closely with the industry's largest players, and perhaps have only scratched the surface of the possibilities of using data and advanced computing in the financial sector.